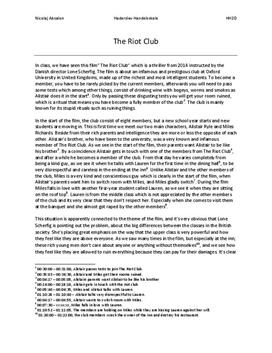 Opgaveformulering
Write an analysis about the film “The Riot Club”. Your analysis must:

1. begin with an introduction
2. include a characterization of the two club members Alistair Ryle and Miles Richards
3. comment on the theme/message of the film
4. discuss the image of the Riot Club which the film projects, and draw lines to the real-life Bullingdon Club (do research)
5. end with a conclusion

In class, we have seen this film” The Riot Club” which is a thriller from 2014 instructed by the Danish director Lone Scherfig. The film is about an infamous and prestigious club at Oxford University in United Kingdoms, made up of the richest and most intelligent students. To become a member, you have to be rarely picked by the current members, afterwards you will need to pass some tests which among other things, consist of drinking wine with bogeys, worms and smokes as Alistair does it in the start . Only by passing these disgusting tests you will get your room ruined, which is a ritual that means you have become a fully member of the club . The club is mainly known for its stupid rituals such as ruining things.

In the start of the film, the club consist of eight members, but a new school year starts and new students are moving in. This is first time we... Køb adgang for at læse mere Allerede medlem? Log ind