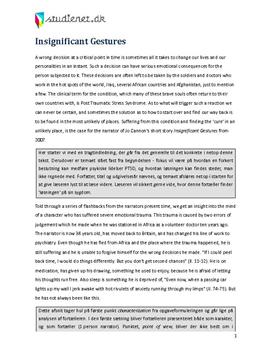 Opgaveformuleringen
Write an essay (700-1000 words) in which you analyse and interpret Jo Cannon's short story "Insignificant Gestures". Your essay must include the following points:

A wrong decision at a critical point in time is sometimes all it takes to change our lives and our personalities in an instant. Such a decision can have serious emotional consequences for the person subjected to it. These decisions are often left to be taken by the soldiers and doctors who work in the hot spots of the world, Iraq, several African countries and Afghanistan, just to mention a few. The clinical term for the condition, which many of these brave souls often return to their own countries with, is Post Traumatic Stress Syndrome. As to what will trigger such a reaction we can never be certain, and sometimes the solution as to how to start over and find our way back is to be found in the most unlikely of places. Suffering from this condition and finding the 'cure' in an unlikely place, is the case for the narrator of Jo Cannon's short story Insignificant Gestures from 2007.

Told through a series of flashbacks from the narrators present time, we get an insight into the mind of a character who has suffered severe emotional trauma. This trauma is caused by two errors of judgement which he made when he was stationed in Africa as a volunteer doctor ten years ago. The narrator is now 38 years old, has moved back to Britain, and has changed his line of work to psychiatry. Even though he has fled from Africa and the place where the trauma happened, he is still suffering and he is unable to forgive himself for the wrong decisions he made. "If I could peel back time, I would do things differently. But you don't get second chances" (ll. 11-12). He is on medication, has given up his drawing, something he used to enjoy, because he is afraid of letting his thoughts run free. Also sleep is something he is deprived of, "Even now, when a passing car lights up my wall I jerk awake with hot rivulets of anxiety running through my limps" (ll. 74-75). But he has not always been like this.

Ideology, self-confidence and naivety are keywords to understanding the narrator prior to the tragic event in Africa. He believed that through his work in a less developed country, he was able to make a difference and save the world. Furthermore, he had a romanticized image of Africa and of his role in that country, "And I remember evenings spent drawing by oil lamp in my little white washed house, while an African sunset poured itself out on the sky" (ll. 16-17). This romanticized image of Africa is quickly torn apart, as he sees more and more of what the country really is like. The hospitals lack proper equipment, the political elite is corrupt, and the police are not really interested in catching the real criminals, but more in getting through the day the easiest way possible. Nevertheless, he stays calm and self-confident and does his job every day, performing intricate operations with terrible means.

The short story is divided into what can be called two beginnings, the first being Celia's insignificant gesture when she places her hand on the back of the narrator's chair in Africa while she watches him draw, and the other being the African nurse who asks about the narrator's ability to speak Chichewa in Britain. They are beginnings in the sense that they set the narrator on a new course in his life.

The first new course is set by Celia when she enters the narrator's life. Celia quickly becomes his companion, by no means his lover, but more like a close friend and student, "Celia was my companion; our elbows at the table never touched. I marvelled that with only three years of schooling she could draw so well. She was a natural" (ll. 55-56).
... Køb adgang for at læse mere Allerede medlem? Log ind