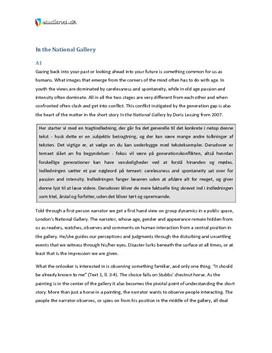 Opgaveformulering
A. Write an essay (700-900 words) in which you analyse and interpret Doris Lessing's short story "In the National Gallery". To put your interpretation into perspective, your essay must include a discussion of at least two of the other items li sted below. One of the se must be a text.

B. The American poets and critics Kennedy and Gioia claim that ... aften point of view determines how well readers will understand a story's theme. A third-person omniscient point of view, for example, may give the reader a sense of authority and stability that makes the narrative seem reliable. A first-person narrator, however, often suggests a eertain bias, especially when the narrator describes events in which he or she played a part. In a short essay (200-300 words) explain how Doris Lessing uses point of view in the short story "In the National Gallery".

A1
Gazing back into your past or looking ahead into your future is something common for us as humans. What images that emerge from the corners of the mind often has to do with age. In youth the views are dominated by carelessness and spontaneity, while in old age passion and intensity often dominate. All in all the two stages are very different from each other and when confronted often clash and get into conflict. This conflict instigated by the generation gap is also the heart of the matter in the short story In the National Gallery by Doris Lessing from 2007.

Told through a first person narrator we get a first hand view on group dynamics in a public space, London's National Gallery. The narrator, whose age, gender and appearance remain hidden from us as readers, watches, observes and comments on human interaction from a central position in the gallery. He/she guides our perceptions and judgments through the disturbing and unsettling events that we witness through his/her eyes. Disaster lurks beneath the surface at all times, or at least that is the impression we are given.

What the onlooker is interested in is observing something familiar, and only one thing. “It should be already known to me” (Text 1, ll. 3-4). The choice falls on Stubbs' chestnut horse. As the painting is in the center of the gallery it also becomes the pivotal point of understanding the short story. More than just a horse in a painting, the narrator wants to observe people interacting. The people the narrator observes, or spies on from his position in the middle of the gallery, all deal with the painting of the horse in some way or another. Furthermore, the horse could be used to understand the various generations that interact in this public space.

The elderly gentleman is the first to deal with the painting, which he does in a very contemplating and knowledgeable way. He teaches a younger man, a son or a student, about Stubbs the painter and the painting itself. The older man is very passionate about the horse and tries to pass his interests on to his listener, but without success. The young man is not interested in listening quietly to art lectures, “the first man then flung out his hand, in a gesture of humorous resignation, and the young man snapped, “you can't make a silk purse out of me, I keep telling you”” (Text 1, ll.22-25). This encounter, vividly described and commented by the narrator, is the first clash of generations. The old man cannot understand the shallowness of his young listener and wants to offer him some of his own values. The horse can be seen as symbol of not only the old values, high art and painting, which the young man rejects, but also of a symbol of the old man himself, who is also rejected. He is passionate about the horse, maybe because he sees some of his former self in it. Whistlejacket which is the name of the horse, was a star racehorse in its day, and symbolizes masculinity, strength, sexuality, vitality and youth, all values the old man no longer possesses, but which he reminisces about.

The young man is not the only one to reject the horse and thereby the elderly man. With the entrance of a group of French girls, another generation segment is represented. These, especially one girl, also rejects the horse, by falling asleep in front of it and laughing at it, “She sat herself up again, and yawned and looked at the great horse […] and she fell asleep” (Text 1, l. 62). Doris Lessing often works with contrasts, something that also can be seen in the contrast between the elderly man and the young girls. The girl, sleeping next to him, sets the old man on a nostalgic trip back to his own youth, where he gazes back on a fling he had with a young girl. The result of his nostalgic trip leads to the old man arguing for the fact that the young generation share the value of passion with the older generation, something his 'student' and the French girls earlier proved not to be the case. “The passions of little kids are just as strong as the grown-ups” (Text 1, l. 106). What not only the young man proves, but also the behavior of the schoolgirls is that where as the old have passion and intensity the young are more careless and spontaneous, and the two generations therefore have trouble understanding each other and coming together... Køb adgang for at læse mere Allerede medlem? Log ind

Materialer relateret til Analytical Essay om "In the National Gallery".