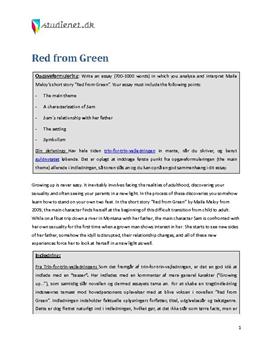 Opgaveformulering
Write an essay (700-1000 words) in which you analyse and interpret Maile Meloy's short story “Red from Green”. Your essay must include the following points:
- The main theme
- A characterization of Sam
- Sam's relationship with her father
- The setting
- Symbolism

Growing up is never easy. It inevitably involves facing the realities of adulthood, discovering your sexuality and often seeing your parents in a new light. In the process of these discoveries you somehow learn how to stand on your own two feet. In the short story “Red from Green” by Maile Meloy from 2009, the main character finds herself at the beginning of this difficult transition from child to adult. While on a float trip down a river in Montana with her father, the main character Sam is confronted with her own sexuality for the first time when a grown man shows interest in her. She starts to see new sides of her father, somehow the idyll is disrupted, their relationship changes, and all of these new experiences force her to look at herself in a new light as well.

“Red from Green” is told by a third person limited narrator, and from the main character Sam's point of view. Sam is an American teenager who is about to start her sophomore year of high school. She lives alone with her father because her mother has died and the two of them share a special bond. Sam is very attentive of him, his opinions and his well-being. This becomes clear as she wonders why her father has stopped using his guns after her mother died, ”She sometimes wondered if her father had quit hunting because he´d been busy taking care of her, or if he´d just stopped liking to shoot things” (p. 2, ll. 37-39). Before the float trip, Sam is considering going away to boarding school, but she doesn´t quite feel ready and neither does her father, “Applying had been her father´s idea, but now he looked dismayed every time the subject came up. […][N]either of them could bring themselves to talk about it” (p.1, ll. 6-9). It seems they are unable to talk about the things that really matter and that her father shows her his love through actions instead of words. Sam doesn´t want to do anything to upset him and is generally well-behaved and cautious. They have gone on trips out in the wild together many times before, but this trip turns out to go differently than all the others. First of all, they are not alone this time; Her uncle Harry is there with a client named Layton from his law firm and it quickly becomes clear to Sam that ensuring the goodwill of the client is the main purpose of the trip, “[I]t was the feeling she got- that they were going for this client” (p.1. ll. 15-16). Secondly, Layton makes everyone including herself act in ways that are new, at least to her. He thus ends up acting as a catalyst in a chain of events that provoke new feelings in Sam: Because of the interest Layton shows her she becomes aware of her own dawning sexuality. The fact that his behavior goes unnoticed makes her see a less firm side of her father, who doesn´t stand up for his principles and who is less protective of his daughter than usually.

Sam is surprised to find that Layton gets away with all sorts of things that her father and Harry normally wouldn´t tolerate. Layton does not follow the unwritten rules, he shoots birds out of season and catches fish that are too small, yet no one says anything. They even choose to ignore the fact that Layton has coaxed Sam into shooting with him out of season and thereby disregard their own principles and values in order to get what they want from him, “When they walked back to the camp, Layton veered off, so they came from different angles. Her father and Harry didn´t say anything.
... Køb adgang for at læse mere Allerede medlem? Log ind