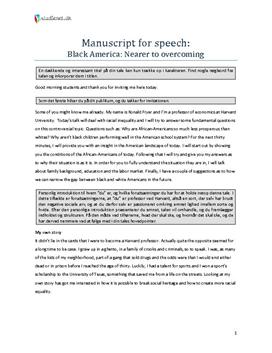 Opgaveformulering
The university of London has invited Ronald Fryer to give a speech on African-Americans in the US to British students. In his speech he accounts for the conditions of the African-Americans. He comments on the reasons for the current situation focusing on e.g. education, family background and the labour market. He suggests how to narrow the gap between black and white Americans in the future and discusses the importance of role models. As Ronald Fyer's Assistant you have been asked to prepare the manuscript.

Eksempelbesvarelsen knytter sig til vejledning til manuscript: hent vejledning her.

Good morning students and thank you for inviting me here today.

Some of you might know me already. My name is Ronald Fryer and I'm a professor of economics at Harvard University. Today's talk will deal with racial inequality and I will try to answer some fundamental questions on this controversial topic. Questions such as: Why are African-Americans so much less prosperous than whites? Why aren't black children performing well in the American school system? For the next thirty minutes, I will provide you with an insight in the American landscape of today. I will start out by showing you the conditions of the African-Americans of today. Following that I will try and give you my answers as to why their situation is as it is. In order for you to fully understand the situation they are in, I will talk about family background, education and the labor market. Finally, I have a couple of suggestions as to how we can narrow the gap between black and white Americans in the future.

My own story
It didn't lie in the cards that I were to become a Harvard professor. Actually quite the opposite seemed for a long time to be case. I grew up in a ghetto, in a family of crooks and criminals, so to speak. I was, as many of the kids of my neighborhood, part of a gang that sold drugs and the odds were that I would end either dead or in prison before I reached the age of thirty. Luckily, I had a talent for sports and I won a sport's scholarship to the University of Texas, something that saved me from a life on the streets. Looking at my own story has got me interested in how it is possible to break social heritage and how to create more racial equality.

Reasons for the current situation: education, family background, labor market
The American landscape of today is not a landscape of racial equality. The black ghetto still very much exists and being raised here among drug dealers and other less well-off individuals makes it difficult for the African-American to break free from the social heritage, as I did. The numbers speak their own language: In 2006 24.3 percent of the American black population was placed in the category “poor” whereas 8.2 of the white population were labeled in the same category. Even when we look at the middleclass black's median household income is still only 63% of whites'.

Family background
There are several factors as to why black American's have a difficulty competing with white American's. Family structure plays a major role here and is the first topic I'm going to discuss. The African-American family has suffered from a collapse since 1970. By collapse I mean that from 1970 and up until today black babies born out of wedlock have increased to 69%. 70% of these births belong to mothers who are going to raise these children completely on their own without any help what so ever.
... Køb adgang for at læse mere Allerede medlem? Log ind