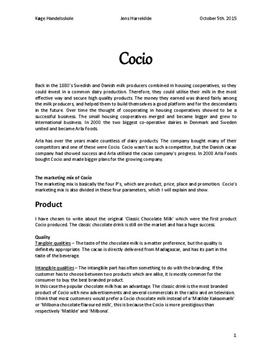 Back in the 1880's Swedish and Danish milk producers combined in housing cooperatives, so they could invest in a common dairy production. Therefore, they could utilise their milk in the most effective way and secure high quality products. The money they earned was shared fairly among the milk producers, and helped them to build themselves a good platform and for the descendants in the future. Over time the thought of cooperating in housing cooperatives showed to be a successful business. The small housing cooperatives merged and became bigger and grew to international business. In 2000 the two biggest co-operative dairies in Denmark and Sweden united and became Arla Foods.

Arla has over the years made countless of dairy products. The company bought many of their competitors and one of these were Cocio. Cocio wasn't as such a competitor, but the Danish cacao company had showed success and Arla utilised the cacao company's progress. In 2008 Arla Foods bought Cocio and made bigger plans for the growing company.

I have chosen to write about the original ‘Classic Chocolate Milk' which were the first product Cocio produced. The classic chocolate drink is still on the market and has a huge success.

Quality
Tangible qualities – The taste of the chocolate milk is a matter preference, but the quality is definitely appropriate. The cacao is directly delivered from Madagascar, and has its part in the taste of the beverage..... Køb adgang for at læse mere Allerede medlem? Log ind

Materialer relateret til The Marketing Mix on Cocio | Afsætning A.