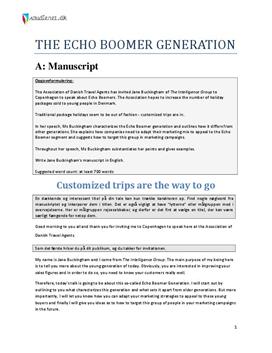 Manuscript
The Association of Danish Travel Agents has invited Jane Buckingham of The Intelligence Group to Copenhagen to speak about Echo Boomers. The Association hopes to increase the number of holiday packages sold to young people in Denmark.
Traditional package holidays seem to be out of fashion - customized trips are in.
In her speech, Ms Buckingham characterizes the Echo Boomer generation and outlines how it differs from other generations. She explains how companies need to adapt their marketing mix to appeal to the Echo Boomer segment and suggests how to target this group in marketing campaigns.
Throughout her speech, Ms Buckingham substantiates her points and gives examples.
Write Jane Buckingham's manuscript in English.

B: E-mailen
You have volunteered to participate in an electronic survey. You have received the following e-mail to which you reply.
Suggested word count: at least 300 words.

A: Manuscript
Customized trips are the way to go
Good morning to you all and thank you for inviting me to Copenhagen to speak here at the Association of Danish Travel Agents.
My name is Jane Buckingham and I come from The Intelligence Group. The main purpose of my being here is to tell you more about the young generation of today. Obviously, you are interested in improving your sales figures and in order to do so, you need to know your customers really well.
Therefore, today's talk is going to be about this so-called Echo Boomer Generation. I will start out by outlining to you what characterizes this generation and what sets it apart from older generations. But more importantly, I will let you know how you can adapt your marketing strategies to appeal to these young buyers and finally I will give you ideas as to how to target this group of people in your marketing campaigns in the future.

Who are they?
There are good reasons for you to want to get a hold of this young generation since they are actually the largest generation of young people since the 1960s. It is obvious that they have a great impact on the economy and an ability to shape the marketing world according to their needs and wishes. My colleagues and I have spent years trying to map out this generation through interviews and focus groups and we have come to the conclusion that these young people are radically different from any generation that has come before.
First of all they are called “The Echo Boomers” because they are the demographic echo of their parents, “The Baby Boomers”. But unlike their parents, these young people have been shipped off to group activities from very early childhood and have been encouraged to and praised for being part of a team. In that respect, they are more like their grandparents really. And at the same time, this young generation is characteristically diverse and tolerant.
...

B: E-mail
To: Danish_survey@theintelligencegroup.com
From: Student
Date: 29-08-2012
Subject: e-survey
Dear Ms Buckingham,
I would be delighted to answer your e –survey about Danish youngsters' use of the media and technology. I think my habits are representative of my generation in that I almost exclusively get my news from the internet. Actually, I hardly ever turn on the TV to watch the news. I just read a headline or a small article if it pops up somewhere while I'm looking around online. That way I really choose what I want to read about and what doesn't interest me. I can see how some older people might see that as a disadvantage because I tend not to read about things that happen on the other side of the planet. Wars and conflicts are easy to discard. I know that my parents see this as a bad thing, but I'm sure my interests will change over time.

My friends are a great influence on me when it comes to learning about new products. But obviously the internet is filled with commercials as well, so we're all getting input from there.
... Køb adgang for at læse mere Allerede medlem? Log ind