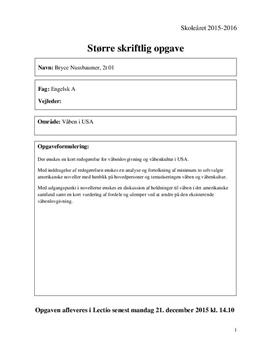 SSO om våben i det amerikanske samfund i Engelsk A

Introduction
Weapons are a big deal in The United States of America. With less strict gun laws compared to other countries, it is easier for an American adult to go in and purchase a firearm. A lot of states have hunting enthusiasts, and being a hunter in the country side is a great sport for most.
Even though firing off guns at shooting ranges or at deer is considered fun, it does come with a price. Because of their “right to bear arms” and easy access to weaponry, the gun violence is high and the death toll as well.
We'll be looking at the weapons legislation in the U.S. and their weapon culture. Explaining where this law comes from, what the differences between state gun laws are, and some statistics on gun violence. We'll be looking at two American short stories involving weapons and analyzing the time, place and the characters to see what influences them to use these weapons. Finding out if it has same outcome as in the real world. Last we'll look at different debates on weapon control between politicians, associations and civilians, estimating what the pros and cons would be if the weapons legislation would to be changed.

Weapons legislation and gun culture in The United States

Bill of Rights
On September 25th 1789, 12 amendments were proposed to the Constitution by congress. It was argued that the Constitution alone was not enough to protect the liberty of each individual in The United States.
It was discussed between federalists and anti-federalists if a Bill of Rights was necessary. The federalists argued that it was unnecessary because the Constitution was enough, and the anti-federalists argued it was necessary, so it could protect the freedom of each individual. Then on December 15th 1791, 10 amendments of the Bill of Rights were ratified by the U.S House of Representatives. Written by James Madison, the Bill of Rights was made to limit the power of the U.S government and give its' citizens more personal freedom. It's a list of specific set of prohibitions on the government's power over the people. Therefore, people of the nation are for example, granted the freedom of speech, allowed to practice their own religion, right to bear arms, right to a fair trial and so on.

Hunters in the Snow

Summary
In Tobias Wolff's short story “Hunters in the Snow” (2008), we follow a man by the name Tub and his two buddies Frank and Kenny. With a balance in the three buddies' personality, we have Tub, the overweight, clumsy man with low self-esteem. Frank, the laid back, down to earth understanding guy. Then we have Kenny, the confident, loudmouth, joking guy who is a bit egotistical. Even though the windshield is broken, they take their truck and head out with their rifles.
While going out hunting in the snowy woods, Tub gets picked on because of his weight by the two others, especially by Kenny. Later without any success, they find tracks leading through the woods to a “no-hunting” sign. Out from the woods, Kenny decides to ask the farmer's permission to hunt on his land. With permission, the three friends head back out into the woods. Before reaching the .... Køb adgang for at læse mere Allerede medlem? Log ind

Materialer relateret til SSO om våben i det amerikanske samfund i Engelsk A.