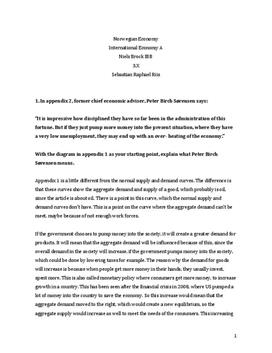 I vores vejledning til skriftlig eksamen i International Økonomi A kan du få hjælp til at løse eksamenssættet.

“It is impressive how disciplined they have so far been in the administration of this fortune. But if they just pump more money into the present situation, where they have a very low unemployment, they may end up with an over- heating of the economy.”

With the diagram in appendix 1 as your starting point, explain what Peter Birch Sørensen means.

2. With appendix 3 as your starting point, explain the dilemma of the Norwegian central bank, when arranging the country's monetary policy.

3. a. Based on the economic indicators in appendix 4, calculate the share of the oil exports of Norway's GDP.
b. Based on appendix 4, analyse the most important explanations for the expected economic growth in Norway in 2015.

4. With appendix 5 as your starting point, discuss advantages and disadvantages for Norway's economy when protecting and subsidising its farming and agri- culture.

5. Based on all of the appendices, assess whether or not it is a good idea to carry through the tax reliefs that appear from appendix 8.

Appendix 1 is a little different from the normal supply and demand curves. The difference is that these curves show the aggregate demand and supply of a good, which probably is oil, since the article is about oil. There is a point in this curve, which the normal supply and demand curves don't have. This is a point on the curve where the aggregate demand can't be meet, maybe because of not enough work forces.

If the government chooses to pump money into the society, it will create a greater demand for products. It will mean that the aggregate demand will be influenced because of this, since the overall demand in the society will increase, if the government pumps money into the society, which could be done by lowering taxes for example. The reason why the demand for goods will increase is because when people get more money in their hands, they usually invest, spent more. This is also called monetary policy where consumers get more money, to increase growth in a country. This has been seen after the financial crisis in 2008, where US pumped a lot of money into the country to save the economy. So this increase would mean... Køb adgang for at læse mere Allerede medlem? Log ind