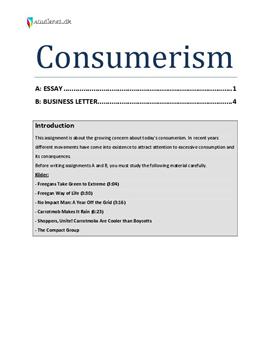 Opgaveformulering
A. Write an essay in which you comment on the US consumer groups and discuss their initiatives to reject today's consumerism. In your essay you include a comment on the quotation by John Perry, Compact cofounder:
"We've enjoyed the camaraderie and competitive spirit with friends,” Perry said. "And it's been really good for us to think about what we need, as opposed to what we want."

B. You are a young British student at Cambridge Sixth Form College. During a stay in California you have met
with some Carrotmob activists who made a great impression on you. You write a letter inviting the local branch of Tesco to participate in a similar British initiative. In your letter you inform the local Tesco manager of the idea behind Carrotmob, the contributions the supermarket must make and the benefits it may gain.
Write the business letter in English.
Suggested word count: 300 words

A.
Freaky Freegans or important inspiration?
In recent years consumerism and the environment have become topics of great debate in America. Groups in the American society are becoming more aware of the impact of their carbon footprint. Carbon emissions and the wellbeing of the planet have become a thoroughly discussed subject – both by the government and the public. Sadly the politicians have not been able to do anything decisive about this rising problem. As a protest against inactive congressmen and senators, new grass roots movements are emerging all over the US. One of these movements is a group of people called “Freegans”. Their objective is to reduce their carbon footprint and be more efficient by means of ‘dumpster diving' and collecting different types of food from trash across the cities. By going through dumpsters and looking through trash, they are able to find lots of edible food, thus saving a lot of money and helping the environment.

A few people going on a scavenger hunt in the trash are not going to save the world, but I do think they are important for the society. Although some might find the actions of these Freegans freaky or even repulsing, they are in fact changing the way people think and act regarding both food and CO2 emissions. In a world where the environment is such a great part of our everyday life, it is important to have these extremists that through excessive means can show us all that it is possible to make a change, without spending a lot of ...

Dear Sir,
My name is John Doe and I am attending Cambridge Sixth Form College. During a stay in California a got acquainted with a different American style of shopping. The main idea behind this is changing the environment. Shoppers unite in ‘shopping-unions' called ‘Carrotmobs' and choose one place to buy all their groceries, in return the supermarket or grocer's agrees to spend a certain amount of the income on energy efficient improvement. In America one shop experienced up to 3 times the normal daily turnover, having promised to spend 22 % of the income on environmental friendly improvements to the store. I would like to make a similar project here in the UK, and that is why I have contacted you. I have an offer for you that ... Køb adgang for at læse mere Allerede medlem? Log ind