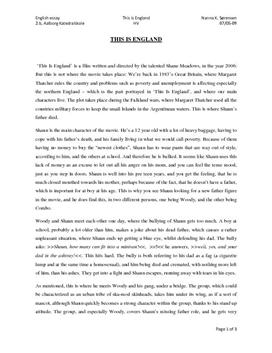 Filmanalyse: This is England - Analyse i Engelsk

‘This Is England' is a film written and directed by the talented Shane Meadows, in the year 2006: But this is not where the movie takes place: We're back in 1983's Great Britain, where Margaret Thatcher rules the country and problems such as poverty and unemployment is affecting especially the northern England – which is the part portrayed in ‘This Is England', and where our main characters live. The plot takes place during the Falkland wars, where Margaret Thatcher used all the countries military forces to keep the small Islands in the Argentinean waters. This is where Shaun's father died.

Shaun is the main character of the movie. He's a 12 year old with a lot of heavy baggage, having to cope with his father's death, and his family living in what we would call poverty. Because of them having no money to buy the “newest clothes”, Shaun has to wear pants that are way out of style, according to him, and the others at school. And therefore he is bullied. It seems like Shaun uses this lack of money as an excuse to let out all his anger on his mom, and you can feel the tense mood, just as you step in doors. Shaun is well into his pre teen years, and you get the feeling, that he is much closed mouthed towards his mother, perhaps because of the fact, that he doesn't have a father, which is important for at boy at his age. This is why you see Shaun looking for a new father figure in the movie, and he does find this, in two different persons, one being Woody, and the other being Combo.
... Køb adgang for at læse mere Allerede medlem? Log ind

Materialer relateret til This is England - Analyse i Engelsk.