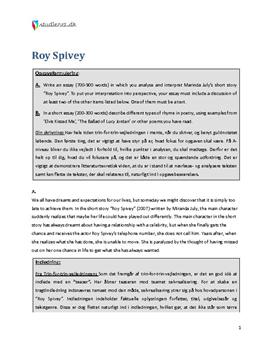 Opgaveformulering
A)Write an essay (700-900 words) in which you analyse and interpret Miranda July's short story "Roy Spivey". To put your interpretation into perspective, your essay must include a discussion of at least two of the other items listed below. One of these must be a text.

B) In a short essay (200-300 words) describe different types of rhyme in poetry, using examples from "Elvis Kissed Me", "The Ballad of Lucy Jordan" or other poems you have read.

We all have dreams and expectations for our lives, but someday we might discover that it is simply too late to achieve them. In the short story “Roy Spivey” (2007) written by Miranda July, the main character suddenly realizes that maybe her life could have played out differently. The main character in the short story has always dreamt about having a relationship with a celebrity, but when she finally gets the chance and receives the actor Roy Spivey's telephone number, she does not call him. Years after, when she realizes what she has done, she is unable to move. She is paralyzed by the thought of having missed out on her one chance in life to get what she has always wanted.

The short story is told through a first person narrative and from the narrator's point of view. Therefore the reader only gets an insight into the story through the main character's thoughts, reflections and observations. Moreover, the composition of the short story also reveals that it is told from the narrator's point of view. Even though the meeting between the main character and Roy Spivey only lasts a few hours, it is what composes the main part of the whole short story. Contrary to this, the rest of the main character's life after meeting Roy Spivey, a life that consists in meeting her husband, getting a daughter and watching her father die from lung cancer is accounted for in only a few paragraphs. This shows that Roy Spivey is a strong presence in her life. The story about Roy Spivey is told as a flashback. The main character suddenly remembers the meeting because she finds the number he once gave her, and she takes the reader back to the meeting in the plane.

Roy Spivey represents a whole different life than the one the main character lives. She is from the middle class, and it is only because she has volunteered to give up her seat on an overcrowded flight that she happens to be in the first class section of the same flight as Roy Spivey. She hates her plain, ordinary life and tries not to think too much about it. At home she is often so confused about what to do that she simply ends up doing nothing at all. However, meeting Roy Spivey inflicts her with the hope that she never has to return to her old life again. She believes that meeting someone like him entitles her to a whole different life all together, “It seemed as though I might never have to return to it now […] I might never stand in the middle of the living room and wonder what to do next” (p. 3, ll. 77-79).

The narrator is enchanted by the moment and feels that she has a secret connection to Roy as they look into each other's eyes. At that moment she feels that nothing else matters, “We looked into each other's eyes in a way that said that nothing else mattered as much as us.” (p. 4, ll. 111-116). Once again this exemplifies that the story is told from the view of a first person narrator. The reader never gets to know whether this “special moment” is just something that happens in the narrator's imagination, or whether it has actually occurred... Køb adgang for at læse mere Allerede medlem? Log ind