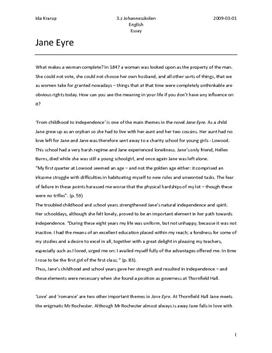 Opgaveformuleringen lød:
"Write an essay (900-1200 words) in which you analyze and interpret the novel you have chosen to read. You may include such elements as: theme(s), title, characterizations and literary devices (metaphors, similes, symbols, personification etc.).

In order to put your essay into perspective give a short discussion of the way in which women are portrayed and what that says about society in the time where the story takes place.

Your essay must include quotations from the text and remember not to include anything that you do not use to make a point."

What makes a woman complete? In 1847 a woman was looked upon as the property of the man. She could not vote, she could not choose her own husband, and all other sorts of things, that we as women take for granted nowadays – things that at that time were completely unthinkable are obvious rights today. How can you see the meaning in your life if you don't have any influence on it?

‘From childhood to independence' is one of the main themes in the novel Jane Eyre. As a child Jane grew up as an orphan so she had to live with her aunt and her two cousins. Her aunt had no love left for Jane and Jane was therefore sent away to a charity school for young girls - Lowood. This school had a very harsh regime and Jane experienced loneliness. Jane's only friend, Hellen Burns, died while she was still a young schoolgirl, and once again Jane was left alone.
“My first quarter at Lowood seemed an age – and not the golden age either: it comprised an irksome struggle with difficulties in habituating myself to new rules and unwonted tasks. The fear of failure in these points harassed me worse that the physical hardships of my lot – though these were no trifles”. (p. 59)... Køb adgang for at læse mere Allerede medlem? Log ind

Materialer relateret til Analysis of Jane Eyre by Charlotte Brontë.