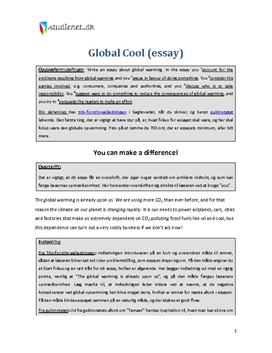 The global warming is already upon us. We are using more CO2 than ever before, and for that reason the climate on our planet is changing rapidly. It is our needs to power airplanes, cars, cities and factories that make us extremely dependent on CO2-polluting fossil fuels like oil and coal, but this dependence can turn out a very costly business if we don't act now!

Within the next few decades experts predict that global warming can cause a permanent destabilizing of our climate, causing huge floods in some parts of the world and massive droughts in other parts. The intensity of storms, hurricanes and heat waves will increase as well. Sadly, the impact will be biggest on the poorest people of the world, especially in Africa and the poorer parts of Asia, like India. More extreme weather will mean a drop in food production and crops will be destroyed by drought, rain or storms. When food production goes down the price on food will go up, leaving the poor without the resources to buy the food they depend on to survive. Heavy droughts in sub-Sahara will mean famine and a lack of water that may prove devastating for the already vulnerable African peoples. In Asia, the risk of floods from the vast rivers is the most urgent problem. Floods can leave millions without homes, destroying villages, farms and crops. All of this will lead to a huge number of so called “environmental refugees” that the world has to cope with. The western world, which is the main consumer of CO2, will have millions of refugees knocking on its' doors. The arguments for fighting global warming therefore are obvious. First of all, we have an obligation to do all we can to prevent terrible consequences like famine and nature disasters and also to secure our children a sustainable future with a healthy climate. Secondly, it is possible for to us to do something about our CO2-comsumption, and that way give scientist the time they need to develop sustainable energy to replace fossil fuel. But whose responsibility is it really to take action?

As consumers we all take part in the overheating of our planet. We each consume about 15 tons of CO2 each year through our modern lifestyles that acquire a huge amount of electricity and energy. Furthermore, it is very much our choices in the everyday that determine what kind of products that will be manufactured and what kind of environmental politics that will be conducted. If we chose not to buy the luxury cars that spend a lot of fuel but instead buy the smaller, environmental-friendly cars, car-companies will act accordingly by producing more and cheaper environmental-friendly cars. And this is just one example, the same goes for housing ... Køb adgang for at læse mere Allerede medlem? Log ind