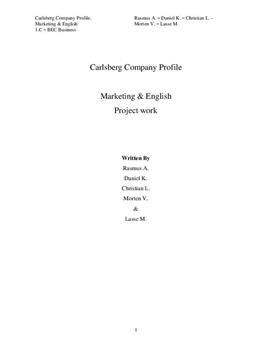 Carlsberg A/S is a Danish brewery company, founded in 1847 by J.C. Jacobsen. Carlsberg is one of the top brewery brands with breweries in more than 50 countries. Carlsberg is represented in more than 150 countries worldwide. In Denmark they own they subsidiary Danish Malting group, which is the biggest Danish Maltery it's located in Ørslev near Vordingborg and was established in 1996.
Carlsberg A/S is well represented in both Scandinavia and Western Europe. Also in Russia they have more than 38% of the share. Carlsberg is on the top 5 most selling breweries worldwide.
Their biggest competition on the international market is the Dutch brewery company Heineken. In 2008, Carlsberg bought out the English competition Scottish & Newcastle with a finale outcome of 106 billion DKK.
Carlsberg has more than 45,000 employees. Carlsberg's is sold in more than 150 countries. In Denmark the staff is 2,000 employees.
Most people think about beers when they think about Carlsberg. They're are mostly known for their beer it's one the most sold products in Denmark. In Denmark the market of beers and alcohol is very large, compared to the size of the population. The Danes are known for their beer drinking. Carlsberg were one of the first breweries in Denmark, and they are now in a leading position of beers in Denmark.
Carlsberg is a very expensive beer compared to other brands like “Dansk Pilsner”. Carlsberg is more than 3 times as expensive as one of the cheep beers. Despite of what most people say they can't taste any difference from other beers, but people choose Carlsberg because it's more exclusive. In some stores in Denmark you can only find Carlsberg as a Danish brand... Køb adgang for at læse mere Allerede medlem? Log ind